To share your memory on the wall of William Stratis, sign in using one of the following options:

William G. Stratis passed away on May 30, 2021. He was born on May 25, 1926 in Newburgh, NY. He grew up in Newburgh, and graduated from Newburgh Free Academy in 1944. Shortly after graduation, Bill entered military service, where he saw combat in Europe. He was captured and taken prisoner while in Germany. During his service, he was wounded twice, and was awarded the Purple Heart. He was also awarded the Bronze Star and the Combat Infantry Badge. Before his discharge, he attained the rank of Sergeant.

After his service, Bill attended Rider College, and graduated with a B.S. in Business Administration. He then worked for Chester Cable, and after that, for IBM for 34 years. Once he retired, he became a financial planner, and devoted himself to the service of other veterans. Volunteering at the VA Hospital at Castle Point, Bill studied to become a Certified National Service Officer. Every year, more than 4 million dollars goes to the families that he assisted at Castle Point.

Due to the public health concerns of the Corona Virus (Covid-19), graveside service will be private. A Memorial Service for Bill will be held at a later date. Please refer to www.Quigleybros.com, for further information. On behalf of the family, thank you for your understanding and support during this difficult time.

Receive notifications about information and event scheduling for William

Print
Due to the public health concerns of the Corona Virus (Covid-19), graveside service will be private. A Memorial Service for Bill will be held at a later date. Please refer to www.Quigleybros.com, for further information. On behalf of the family, thank you for your understanding and support during this difficult time.

We encourage you to share your most beloved memories of William here, so that the family and other loved ones can always see it. You can upload cherished photographs, or share your favorite stories, and can even comment on those shared by others.

Posted Jun 04, 2021 at 08:23am
My deepest sympathies to all of Bill's family. I have very fond memories of the get togethers at the Stratis house and the short hop from Richard and Elaine's to the back door to pop in for a visit. I always felt welcome and enjoyed the conversation and company - "Uncle Bill" always made me feel like family - i am truly grateful. I know how much he will be missed by all of you. Sincerely, Dave Poplawski
Comment Share
Share via: 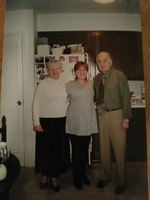