To share your memory on the wall of Iva Marshall, sign in using one of the following options:

Iva Jean Wilson Marshall, 83, of Cornwall died unexpectedly at Montefiore St. Luke’s Cornwall Hospital on Saturday, January 16, 2021. She was born on December 3, 1937 in Mt. Airy, NC and grew up in Knoxville, TN.

Jean is survived by her son: Douglas Marshall and his wife Heewon of Newburgh; and two step-daughters: Renita Marshall McGuinness and her husband Kerry of Cornwall and Deborah Marshall Jackson and her husband Rodney of Auburn, NH. Her son, Gregory Marshall predeceased her. He leaves his wife, Elaine Marshall of Kerhonkson. Jean is also survived by her beloved grandchildren: Keller McGuinness, Kate McGuinness Wright, Stephanie Jackson Gero, Brittany Jackson Cammett, Monica Marshall MacNamara, Amber Marshall and Tonya Marshall Riddlehoover. She has also left behind 15 great grandchildren. Her most treasured times have always been the time spent with her children and grandchildren.

Jean met her husband, DeWitt at the Hotel Thayer, West Point where she worked for 50 plus years. DeWitt was the Executive Chef there. She was an active member of the Cornwall Baptist church and very much enjoyed her Bible study groups and the many friendships she made at the church.

The family would like to thank her dear friends Beverly Soderberg, and Dale and Matthew Conklin for their unending friendship and support.

In lieu of flowers, donations can be made, in her memory to the Cornwall Baptist Church, 213 Main Street, Cornwall, N.Y.

Visitation will be held from 11 a.m. to 1 p.m. on Saturday, January 23rd at Cornwall Baptist Church, 213 Main Street, Cornwall, NY. Due to the continued public health concerns of covid-19, please know that there is an occupancy limitation which may cause a wait time. Facial coverings must be worn in church at all times.

A Funeral Service will be held at 1 p.m. following the visitation. Interment will take place at the Cornwall Baptist Cemetery, Cornwall, NY.

Receive notifications about information and event scheduling for Iva

Donations are being accepted for: Cornwall Baptist Church.

We encourage you to share your most beloved memories of Iva here, so that the family and other loved ones can always see it. You can upload cherished photographs, or share your favorite stories, and can even comment on those shared by others.

Keller, Steph, Calvin, and Darby purchased flowers and planted a memorial tree for the family of Iva Marshall. Send Flowers 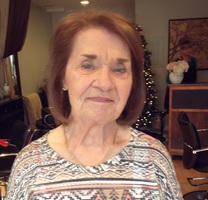