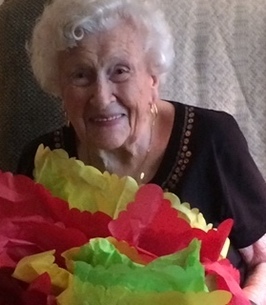 Anna was the daughter of the late Joseph Petrovskis and Prakseda (Makna) Petrovskis. She was born and grew up in Latvia. She had one brother and a twin sister, who sadly passed away at 8 months old. She met the love of her life, Alexander (George) at a soccer game. Alexander predeceased her in 2006.

Anna was an accomplished Seamstress who studied at The School of Design. Alexander was a Border Control Guard and consequently the family moved around a great deal, due to his occupation. They had two daughters; Viktorija who resides in Poughkeepsie with her husband Ray, and Regina lives in Queens with her husband Burt. Anna always boasted about her two grandchildren; Kathy and Raymond and her three great grandchildren: Alexander, Luka and Kye, who Anna referred to as “Peace, Hope and Joy”.

Anna’s most awesome memory was when the ship the family was sailing on for 14 days pulled into New York Harbor and there stood the Statue of Liberty! Anna had always been a craftswoman and enjoyed silver smithing as well. She had a love for sewing, crocheting and gardening. She had a delightful sense of humor, which was a joy to all who knew her. Anna will be missed by so many.

Memorial Contributions in Anna’s name may be made to Susan G. Komen, http://ww5.komen.org/ or Dutchess County SPCA, http://www.dcspca.org/

We encourage you to share any memorable photos or stories about Anna. All tributes placed on and purchased through this memorial website will remain on in perpetuity for future generations.