To share your memory on the wall of Senator William Larkin, sign in using one of the following options:

The State of New York lost one of its treasures with the death of State Senator William J. Larkin, Jr., a longtime area resident, who died peacefully at home surrounded by family on August 31, 2019. He was 91 years of age and had served his country and community for 75 years.

Soldier, Statesman and Citizen, he was born in Troy, NY on February 5, 1928 and was raised by his Aunt and Uncle, Kathleen and Connie Koch. He volunteered for the draft and entered service in 1944 at the age of 16. Senator Larkin saw combat in New Guinea and the Philippines during WWII and then served in combat in the Korean War. Twenty-three years of exemplary service took him from Private to Lieutenant Colonel at retirement in 1967 with the Legion of Merit and seven Army Commendation medals.

During his combat service he received seven Battle Stars, one for WWII and six for Korea. He often spoke with pride of his service to President John F. Kennedy as Army Project Officer on the famous trip to Berlin in 1963. Another career highlight was providing security and protection for Dr. Martin Luther King, Jr. on his historic march from Selma to Montgomery, Alabama. He always treated the men under his command by applying his own version of the motto Duty, Honor and Country by adding the word Respect. To this day he was in contact with men he served with throughout his military career. Many years after his retirement he was awarded the Army’s highest civilian award, the Decoration for Distinguished Civilian Service in recognition of his tireless service on behalf of veterans and substantial contribution to the accomplishments of the Army’s mission. In addition, the New York State Senate awarded Senator Larkin the first New York State Senate Veterans Leadership Award for his work on behalf of New York’s veterans.

Widely recognized among his colleagues both in New York State and nationally for his vast knowledge and expertise about the insurance industry, Senator Larkin was elected in November 2001, as President of the National Conference of Insurance Legislators (NCOIL). NCOIL is a bipartisan organization of State Legislators from the fifty states whose primary area of public policy is insurance. In 2002, Senator Larkin was named one of the “100 Most Powerful People in the Insurance Industry-North America”.

The Purple Heart Medal, our nation's oldest military award was the focus of what the Senator considered two of his most important legacy accomplishments. He is a charter member of the prestigious four-man Genesis Group, which founded the National Purple Heart Hall of Honor located in New Windsor, NY. Senator Larkin also initiated the campaign to create the Purple Heart Forever Stamp. Both of these efforts took over a decade to complete and would not have been possible without Senator Larkin’s unwavering tenacity and patriotism.

Senator Larkin was awarded an honorary degree of Doctor of Humane Letters by Mount Saint Mary College in Newburgh for his service to his community, state, and country. He is a member of the Catholic War Veterans, Knights of Columbus, Veterans of Foreign Wars, The American Legion, and the Disabled American Veterans, and an honorary member of the West Point Society of New York. He is a long-standing member of the Orange County Citizens Foundation and a recipient of the prestigious Ottaway Medal. Senator Larkin and his wife Patricia Kurucz McGuirk Larkin, a retired teacher from the Newburgh Enlarged City School District, share eight children and 17 grandchildren.

Visitation will be held from 4 to 8 p.m. on Wednesday, September 4th at the Newburgh Armory Unity Center in the William and Pat Larkin Education Center, 321 S. William Street, Newburgh, NY under the direction of Quigley-Sullivan Funeral Home of Cornwall-On-Hudson. A Mass of Christian Burial will be held at 11 a.m. on Thursday, September 5th at St. Thomas of Canterbury, 340 Hudson Street, Cornwall-On-Hudson, NY.

In lieu of flowers, donations can be made to Newburgh Armory Unity Center, Hospice of Orange and Sullivan Counties and Nora Cronin Presentation Academy.

We encourage you to share your most beloved memories of Senator William here, so that the family and other loved ones can always see it. You can upload cherished photographs, or share your favorite stories, and can even comment on those shared by others.

Posted Sep 12, 2019 at 03:54pm
I will never forget when Senator Larkin attended my father's funeral 5 years ago. He was and will always be a great person, who loved his family, country and community. R.I.P.
Jacqueline Cracolici-Gallo
Comment Share
Share via:
RR

Posted Sep 05, 2019 at 03:18pm
Honorable Soldier, Statesman, and Mentor. Thank you for your service, friendship, and mentorship. You will be missed, but never forgotten. Richard Rivera, USAF (Ret.)
Comment Share
Share via:
SC

Posted Sep 05, 2019 at 09:25am
Bill was a wonderful person, friend and loved his family and Country deeply. Our world would be a better place if everyone followed his lead in dealing with adversity, conflict and even good times like Bill. Pat and Bill were usually the first people I would see at any NCOIL meeting and, even when Bill could barely stand due to his injuries from his service many years ago, he was there with a smile and a hug. I cherish our times together in the trenches and just talking. My family sends our love to Pat and Bill's family.

Posted Sep 04, 2019 at 07:06pm
Although I never personally met the senator, my brother Arthur, who started his career as a Newburgh Firefighter, then a official from the AFL-CIO, and later a private lobbyist, had many dealings and through my conversations with my brother Arthur he had nothing but positive and respectful things to say about Mr. Larkin. As well our father was a WWII veteran and he had nothing but respect for the senators patriotic duty. My brother Arthur passed away this past April. On behalf on the entire Wilcox family, I would like to extend our condolences to the Larkin family. As well to let you all know that you all are in our thoughts and prayers. God bless.
Comment Share
Share via:
JB

Posted Sep 04, 2019 at 03:20pm
Our Condolences to Senator Larkin's family from adoptee rights advocates with the Unsealed Initiative. Senator Larkin was the prime sponsor of our legislation from 2005 to 2010 when democrats took senate leadership. He was so nice. and easy to work with. Also he never chose to amend our legislation to something we would oppose. We will never forget his support for legislation that just recently passed in bot house in the 2019 legislative session.
Comment Share
Share via: 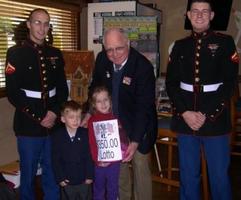