To share your memory on the wall of Scott Hunt, sign in using one of the following options:

Born in Susanville, California in 1946, Scott Edwin Hunt was the younger of two children of Roy and Myra Hunt; sister Claudia. Scott spent his childhood in the Sierra Nevada’s near his grandparents’ cattle ranch. Surrounded by majestic mountains and panoramic vistas, Scott fell in love with mother nature and all of her grandeur. His years on the ranch would be forever ingrained in his soul and he would often tell ranch tales and speak of its beauty.

Scott’s family ended up in Arcata, California, where he would spend his teenage years and graduate from Arcata High School. He spent a year at the South Dakota School of Mines, transferred to Humboldt State, and the following year enrolled in the University of California Davis where he enlisted in ROTC and continued to play baseball. After graduating with a degree in Mechanical Engineering, Scott reported to Fort Lewis ready to serve his country, only to be honorably discharged due to an injury.

Fresh out of college, Scott was hired by General Electric as an Application Engineer. The company eventually sent him from Long Beach, California, to Phoenix, Arizona, to Schenectady, New York; the latter of which led him on an epic cross-country road trip that culminated in a Northeast blizzard.

Scott joined a rugby team once he settled in New York. It was at a rugby party in 1970 where he spotted Carole Clark from across the room. Scott and Carole began dating and, due to Scott’s love of history, their first date was at Saratoga Battlefield. They married on August 18th, 1973 in Lake George, New York, amid the natural beauty of the Adirondacks.

In 1978, Scott and Carole moved their family to Cornwall-on-Hudson where they would spend the next 43 years. Four children soon followed. Scott was the ultimate provider and family man. He was a beloved coach of youth teams that he coached for 20 years, becoming an inspirational mentor among the youth in his community.

Scott received his Master’s Degree in Electrical Engineering from Stevens Institute of Technology and continued his career in engineering for 30 years. From St. Regis Paper Company to Champion International, Scott held several engineering management positions in the Process Control Department. He was later promoted to Director of Manufacturing Control Systems at the corporate headquarters in Stamford, CT where he helped develop major process control projects and often traveled to industry-wide conferences presenting his findings.

After retirement, Scott was inspired to teach AP level math classes at Storm King School. He continued his love of sports there by coaching both the boys and girls soccer teams. Scott loved teaching and coaching so much, he remained there for 12 years.

As Scott’s children grew older, he enjoyed traveling around the country to visit them in Colorado, California, Massachusetts, Hawaii, Alaska, and Washington State. Five grandchildren arrived within three-years’ time and Scott reveled in their playfulness. Many of Scott’s passions were often surrounded by nature and sport. He loved fly-fishing, hiking, being out in his rowing shell on Lake George, and attending professional baseball and hockey games with his kids.

Nothing was dearer to Scott than his family. He is survived by his wife Carole of almost 48 years and their children Kevin (wife Ann), Lanie (husband Russ), Kyle (wife Ashley), Darren, and five grandchildren: Tessa, Braydon, Molly, Hudson, and Caleb. As the patriarch, he enjoyed family gatherings and especially sharing laughs. His family will miss him dearly and will cherish his legacy always.

In lieu of flowers, gifts in memory of Scott Hunt may be given to Gateway Mountain Center (sierraexperience.org), Lake George Association (lakegeorgeassociation.org) or Hudson Highlands Nature Museum (hhnm.org)

Receive notifications about information and event scheduling for Scott

We encourage you to share your most beloved memories of Scott here, so that the family and other loved ones can always see it. You can upload cherished photographs, or share your favorite stories, and can even comment on those shared by others.

Katrina and her parents, Sandy Huang (SKS), and other have sent flowers to the family of Scott Edwin Hunt.
Show you care by sending flowers

Posted Jun 04, 2021 at 04:52pm
Kate and I are so saddened to hear of Scott’s passing but so comforted by the fact that we knew him over the last 15 years Scott was a mentor to me and a listener when I needed it the most even though he thought I was always listening to him. This news just reinforces what Scott always used to say, “that life is not fair”. But with a smile on his face I can say, Scott, you will remain eternally handsome. Your friend, Jim
Comment Share
Share via:
CW

Posted Jun 04, 2021 at 09:31am
Peter and I are so sorry to hear of Scott’s passing. We remember him being at the pulpit at Cornwall Methodist Church and always appreciated his thoughtful words and insights. Sending love and prayers to you all.
Comment Share
Share via:
GG

Posted Jun 04, 2021 at 08:00am
My deepest condolences to you all. I do remember Scott from the years when the children were young and this makes me so sad. I'm glad he had so many wonderful people in his life to make it rich and full.

Katrina and her parents

Katrina and her parents purchased flowers and planted a memorial tree for the family of Scott Hunt. Send Flowers 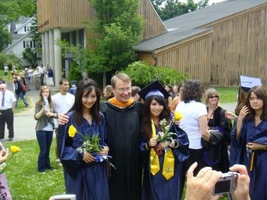 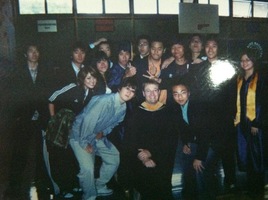 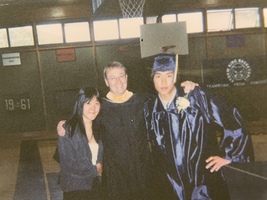