To share your memory on the wall of Richard Walsh, sign in using one of the following options:

Richard T. Walsh, a former longtime Cornwall resident, entered into eternal rest on October 5, 2020 at The Manor at Woodside in Poughkeepsie, NY. He was 99 years old.

The son of the late Robert H. Walsh and Mary (Kelliher) Walsh, Richard was born on December 3, 1920 in Boston, MA.

Richard graduated from High School in Oceanside, NY and obtained his Bachelor Degree at SUNY Cortland and his Master’s Degree at Columbia University. He was a physical education teacher, coach, and Director of Athletics for the Cornwall Central School District, Cornwall, NY.

Richard honorably and proudly served his country from 1939 to 1946 as a member of the U. S. Army Air Corps during World War II, earning a rank of Captain.

He was an active sportsman, being a member of Storm King Golf Club, Newburgh Country Club, and Otterkill Country Club over the years. He was a sports official in basketball, baseball, and soccer. He coached Cornwall-on-Hudson High School to league championships in soccer and baseball. He also coached basketball at Cornwall-on-Hudson and was the first football coach at Cornwall Central. He enjoyed playing tennis, baseball, and bowling. Richard was most at home on a course, a field, or on a court. He was a loving and proud husband, father and grandfather. He will be missed greatly.

Richard is survived by his loving wife, Lucille (Hannon) Walsh at home; his son: Terence Walsh and his wife Loretta, of Poughkeepsie, NY; and his grandchildren: Conor Walsh of Poughkeepsie, NY, Olivia Walsh Convery and her husband Joseph of Drexel Hill, PA, and Madeline Walsh of Grimsby, England. Richard was predeceased by his son and daughter-in-law: Shaun P. and Amanda Walsh.

Due to the public health concerns of the Corona Virus (Covid-19), services for Richard will be private. Please refer back to this website, www.Quigleybros.com, for further information. On behalf of the family, thank you for your understanding and support during this difficult time.

Receive notifications about information and event scheduling for Richard

We encourage you to share your most beloved memories of Richard here, so that the family and other loved ones can always see it. You can upload cherished photographs, or share your favorite stories, and can even comment on those shared by others.

Posted Oct 31, 2020 at 04:35pm
My sincere condolences to the family. I will always remember coach, as a teacher who instilled in me the desire to never quit,
Comment Share
Share via:
WR

Posted Oct 11, 2020 at 11:56am
Deepest sympathy to the entire Walsh family. "Coach" will be fondly remembered by all who played for him. "Coach" & Millie Rieb
Comment Share
Share via:
DG

Posted Oct 11, 2020 at 11:48am
Dick Walsh and his wife were teachers at C-on-H as was my mother. I remember him always neatly attired in usually black physical ed teachers attire.
Blessings to the Walsh family as they grieve and celebrate his life.

Posted Oct 11, 2020 at 08:23am
To Richard's family:What a life Dick lived, only 2 months shy of turning 100. I had the pleasure of knowing Dick from Cornwall High and bowling against him in the Cornwall Merchants League at Bowling Time. He was quite the sportsman. He was a nice gentleman who will be missed. May he rest in peace.
Comment Share
Share via: 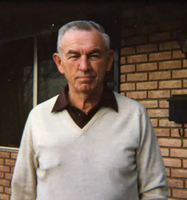