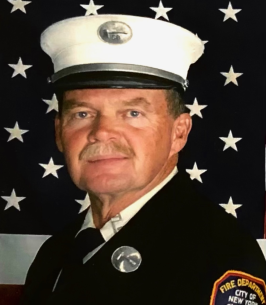 Richard J. Bittles, Sr., of Cornwall-On-Hudson, NY entered into eternal rest on January 26, 2022 at home surrounded by his loving family. He was 82 years old.

The son of the late Robert Bittles and Adrienne (Larmon) Bittles, Richard was born on June 10, 1939 in Norwalk, CT. His family moved back to the Bronx, NY when Richard was a toddler.

Rich graduated from St. Nicholas of Tolentine, honorably and proudly served his country as a member of the U.S. Coast Guard, attended Hunter College and then went on to receive a BA from John Jay College of Criminal Justice. His career spanned 30 years, across four decades in the FDNY. He served in one of the busiest companies, Ladder 31, during the “War Years” in the 60’s and 70’s. He retired as a Lieutenant from Ladder 58 of the Bronx.

Outside of work, Rich loved to golf. He organized many trips for the members of Storm King Golf Club of which he was a member. He also loved to help coach and/or support his kid’s sports teams. When grandkids came along, he supported all of them in their endeavors whether it be sports or dance and we believe not one game or recital was missed. Mr. B could always be found at the local coffee shop with his crew & playing lotto. He talked to everyone and anyone. He will be greatly missed.

In addition to his parents, Richard was predeceased by his son: Richard J. Bittles, Jr.; his brother: Robert; and his sister: Adrienne Burke. He is survived by his loving wife: Suzanne M. (Fracasse) Bittles at home; his brother: Ronald Bittles and his wife Florence of Florida; his daughter: Jennifer A. (Bittles) Doyle and her husband Kevin of New Windsor, NY; his son: James A. Bittles and his wife Sylvia of Cedar Point, NC; his grandchildren: Robert, Richard, Courtney, James, Christopher, Amanda, Ryan and Brendan; and by his great grandchildren: Charlotte, Maddox and Francesca.

Memorial Visitation will be held from 2:00 p.m. to 6:00 p.m. on Friday, February 11th at Quigley-Sullivan Funeral Home, Inc., 337 Hudson Street, Cornwall-On-Hudson, NY. Due to the continued public health concerns of covid-19, please know that facial coverings must be worn in the funeral home at all times.

In lieu of flowers, donations can be made to The New York Firefighters Burn Center Foundation, 21 Asch Loop, Bronx, NY 10475.