To share your memory on the wall of Louis Sumin, sign in using one of the following options:

Lou attended City College and served in the U.S Army. His early careers included accounting and commercial real estate sales. In 1970, he founded EDP World; a highly successful search firm specializing in recruiting IT talent and later Hyatt Leader, both firms were based in New York City.

During the late ‘80’s and early’90’s Lou and his wife, Judy, served on the Executive Board of New York Metropolitan Chapter of Make-A-Wish. Lou had an adventurous spirit which included scuba diving in exotic locations, riding his Harley, snowmobiling, boating, and many exciting and beautiful sailing trips to the Caribbean....always with Judy by his side. Lou & Judy didn’t have children but loved their dogs; the Rhodesian Ridgebacks, Zuri l and Zuri ll and then the Red Poodles: Koby and Coby!

Everyone loved Lou and his funny, unique, quirky personality. He will surely be missed and fondly remembered. Lou’s remains will be cremated.

Lou & Judy were a unit, a team, a class act......now that they are reunited they will both Rest in Peace.

If there are martinis in heaven, Lou and Judy will be toasting each other.

Due to the public health concerns of the Corona Virus (Covid-19), memorial services for Louis were private. On behalf of the family, thank you for your understanding and support during this difficult time.

Print
Due to the public health concerns of the Corona Virus (Covid-19), memorial services for Louis were private. On behalf of the family, thank you for your understanding and support during this difficult time. 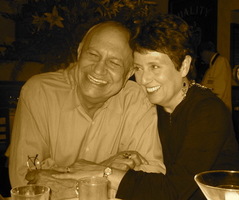