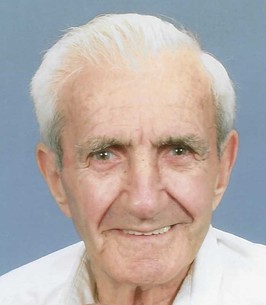 George R. Blaison, Sr., of the Town of Newburgh, NY entered into eternal rest on July 17, 2022 at home surrounded by his loving family. He was 96 years old.

The son of the late Charles Blaison and Mary (Antoine) Blaison, George was born on June 13, 1926 in Newburgh, NY. He married Elizabeth “Betty” Banks in 1949.

In 1958 George started George’s Kerosene & Fuel, which was located in Mountainville and the Town of Newburgh. In 1991 he retired and the fuel oil business is currently known as George’s Fuel in Walden and is still family owned. Even though retired, he mowed a family estate’s fields in the Mombasha area of Monroe for 60 plus years quitting only at age 94 due to him breaking 4 ribs while tending his garden at his home.

He honorably and proudly served his country as a member of the U.S. Army, 9th Air Force Division from 1945 to 1946 during WWII and was an active member of the VFW Post 973 and the American Legion Post 1420 in Newburgh.

George enjoyed camping and was an avid fisherman in upstate Schroon Lake, taking Betty and their grandchildren with him. Poppop loved teaching them how to catch fish and then he would cook the fish on a campfire. He also travelled in his motorhome taking his grandchildren to Disney World. Poppop’s potato pancakes were the best!

During his entire life he helped everyone. He volunteered his time at a church food pantry in the city of Newburgh. His heart was filled with love for his family, friends, acquaintances, and even strangers. Either with a helping hand working on their vehicles, growing a huge garden to feed his extended family or taking people into his home when they had no place else to go. He wanted to help as many people as he could and he did. He definitely lived to give and now he is at peace knowing his work is done here.

He will be missed greatly but he will be forever united with our Mom and Grandma.

The family wants to thank Orange-Sullivan Hospice for their care and support and an overwhelming thank you to his friend, Shirley Brewer, and niece, Rose (Sissy) Maneely, for their constant 24-hour caregiving at his home for the last 2 months. We are forever grateful!

Visitation will be held from 4:00 p.m. to 8:00 p.m. on Monday, July 25th at Quigley-Sullivan Funeral Home, Inc., 337 Hudson St. Cornwall-On-Hudson, NY. A Chapel Service will be held at 10:30 a.m. on Tuesday, July 26th at the funeral home. Interment with Military Honors will follow the Service at Cemetery of the Highlands, Highland Mills, NY.