To share your memory on the wall of Col. Charles Kottich, sign in using one of the following options:

Provide comfort for the family by sending flowers or planting a tree in memory of Col. Charles Kottich

Provide comfort for the family by sending flowers or planting a tree in memory of Col. Charles Kottich

Charles Robert Kottich was born in Falls City, Nebraska, the son of Walter Herman Kottich and Emma Scheitel Kottich. Two older brothers served during wartime, Walter in the Navy during World War II and Virgil in the Marine Corps in Korea. Other siblings Sterling, Lila, and Violet completed the family, with Charles as the youngest of the six.

Chuck grew up on a dairy farm in rural Nebraska. From the first through eighth grades he attended a one-room schoolhouse, with only one other student in his grade. When he then moved on to a “big city” high school of 100 students, he wound up as valedictorian (and his grade school classmate was close behind as salutatorian). Graduating from Falls City High School in 1952, Chuck entered the Military Academy on an appointment from Senator Fred Seaton of Nebraska.

The night before he caught a train to enter West Point Chuck pitched the last game of his American Legion baseball career against a team from Omaha, notching a 3-1 victory. He later learned that his pitching opponent had been Bob Gibson, later the Hall of Fame star of the St. Louis Cardinals.

As a cadet in Company I-2 Chuck played plebe lacrosse, was in the Pistol Club, and was with the PIO Detail the whole way through. As a First Classman he was a Cadet Sergeant.

Wrote his classmates in The Howitzer, the West Point yearbook, “Chuck, leaving the green fields of Nebraska, quickly acclimated himself to the green walls of USMA. With academics posing no problems, Charley’s greatest claim to fame was his prowess in intermurals. The competitive spirit he built in himself while at the Rock will carry him far in his career.”

Classmate John Shaud later recalled how Company I-2 won the Banker’s Trophy, awarded for dominance in intramural athletics, in both the Cow and Firstie years. “I think the company would agree,” he said, “it was Chuck Kottich who did the heavy lifting on many of the ‘fields of friendly strife.’ ”

Upon graduation Chuck was commissioned in Infantry. After the Infantry Officer Basic Course and airborne training at Fort Benning, then Ranger School, he went for his first troop assignment to the 6th Infantry of the Berlin Brigade in Germany.

Two years later he was posted to Fort Myer for service with the 3rd Infantry (The Old Guard), the Army’s ceremonial regiment, also as an additional duty serving as a White House social aide. After two years there he attended the Career Course at the Armor School at Fort Knox, then spent a year as an armored infantry company commander in the 2nd Armored Division at Fort Hood, Texas.

In June 1962 Chuck married Mary Warner at Fort Hood. They had first met at Fort Knox, where she was a teacher in the dependent school. Together they had daughters Caroline, Jennifer, and Kristen. Later there were eight grandchildren.

Vietnam came next, as Chuck was one of the earliest in his class to serve there, functioning as an advisor to the 31st Vietnamese Ranger Battalion based in Ben Luc, north of Saigon, during 1962-1963.

Returning, Chuck spent two years at Sixth Army in the Presidio of San Francisco, California, in the Operations Branch. He then attended the Command & General Staff College at Fort Leavenworth.

Civil schooling came next, as in 1969 Chuck earned a Master of Science degree in Engineering from Arizona State University. He then returned to Vietnam for a second tour, this time as S-3 of the 3rd Brigade, 9th Infantry Division, at Tan An in the Delta.

Returning Stateside, Chuck drew Pentagon duty, two years in the Office of the Assistant Chief of Staff for Force Development. He then returned to Berlin, commanding the 2nd Battalion, 6th Infantry, there for two years. For the following year he was an assistant chief of staff to the U.S. commander there.

Back in the U.S., Chuck spent two years at the Training & Doctrine Command at Fort Monroe, where he was Chief of the Analysis Office. He also completed the Army War College through corresponding studies with the Class of 1979.

Chuck then became Commander of the U.S. Military Group in Venezuela for a three-year tour. His final active duty assignment was another three years at Readiness Command at MacDill Air Force Base in Florida. He retired in 1985 as a full colonel.

In many assignments Chuck was decorated for valor and achievement, receiving two Bronze Star Medals for Valor and six additional Bronze Star Medals, an Air Medal for Valor and two additional Air Medals, two Meritorious Service Medals, a Joint Service Commendation Medal and an Army Commendation Medal. From the Vietnamese he received the Gallantry Cross with Bronze Star and Palm and the Civic Actions Medal. He also wore the Combat Infantryman Badge, the Parachutist Badge, and the Ranger Tab.

In civilian life Chuck became a broker with Century 21 realtors, as did his wife Mary. Residing then in Largo, Florida, near Tampa, they were so successful that in 1993 they were inducted into the Century 21 International Hall of Fame as the top producing team in Florida for a string of years and in the top ten nationally. But they also somehow found time for classmate golf, in which Chuck once achieved a hole in one while satisfyingly playing a match to which he had been challenged by his son-in-law. And of course, there were plenty of grandchild inspection and admiration visits.

Everyone who met Chuck loved and adored him, appreciating his kind smile and pleasant humor. His three daughters respected, adored and cherished every part of him. He loved them and would have done anything for his family. He enjoyed an epic love story with his wife of 57 years. They truly made the perfect life partners.

Chuck Kottich was a fine soldier and an admirable man. May he rest in peace.

Receive notifications about information and event scheduling for Col. Charles

We encourage you to share your most beloved memories of Col. Charles here, so that the family and other loved ones can always see it. You can upload cherished photographs, or share your favorite stories, and can even comment on those shared by others.

Posted Oct 04, 2020 at 10:57pm
All we take with us when we pass on is the love in our hearts ,and Chucks was overflowing.Rest In Peace great man . Duty Honor Country .Proud family. 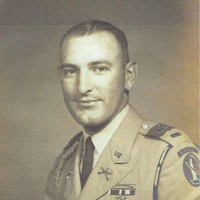