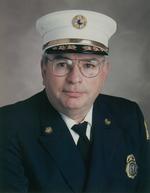 The son of the late William L. and Dorothy (Hills) Pinder, he was raised in Cornwall, NY and graduated from Cornwall Central High School in June, 1961. Bob joined the US Marine Corps immediately following graduation and served proudly and honorably for 3 years. He then followed his father and brother and became a bridge and structural ironworker with Local 417, Newburgh, NY and worked until his retirement in 2002.

Bob had joined the ranks of volunteer firemen by becoming a member of Highland Engine Company No. 1 in l964 and began his remarkable journey in the fire service. A natural leader, he climbed his way through the ranks of line officer for the Highland Engine Company and then was elected to the office of Chief of the Cornwall Fire Department in 1972. He served as Chief for a total of 12 years. He continued to serve as Fire Commissioner for the Canterbury Fire District and was an active Deputy Fire Coordinator for Orange County “Car 16” for several years. Bob was a member of the Orange County Fire Advisory Board, the Orange County Fireman’s Association, and was a member of the founding committee for the Orange County Firefighter’s Burn Fund. He has worked as one of the Fire District Mechanics for the last several years.

In1992, Bob was named a Distinguished Alumni of Cornwall Central High School because of his commitment to community service in the town of Cornwall. Bob was an outdoorsman and sportsman who enjoyed hunting and his particular passion of fly fishing for trout in the Catskills and Delaware County rivers.

Survivors include his wife of 54 years: Karen (Kinsler) Pinder; his brothers: William T. Pinder, and his wife Linda of Myrtle Beach SC and Thomas Pinder, and his wife Barbara of Middletown, NY; and several nieces, nephews and cousins who all loved and will sorely miss “Uncle Bob”. In addition to his parents, Bob was predeceased by his brother Douglas Pinder in 1965.

Visitation will be held from 4 to 8 p.m. on Thursday, September 5th at Quigley-Sullivan Funeral Home, Inc., 337 Hudson Street, Cornwall-On-Hudson, NY. A Mass of Christian Burial will be held at 11 a.m. on Friday, September 6th at St. Thomas of Canterbury Church, 340 Hudson Street, Cornwall-On-Hudson, NY. Interment with Military Honors will follow the Mass at St. Thomas Cemetery, Cornwall, NY.