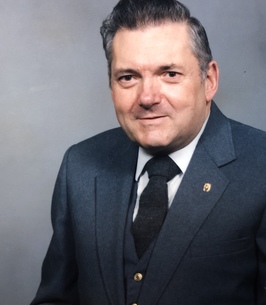 Michael A. Canausa of Cornwall-On-Hudson, NY entered into eternal rest on December 8, 2018. He was 86 years old.

The son of the late Michael L. Canausa and Mary (Schoudel) Canausa, Mike was born on November 23, 1932 in Cornwall, NY. Mike grew up in Highland Falls and met the love of his life, Angelina, while she was visiting from Italy. She went back home but he could not forget her. He pursued her relentlessly, despite their language barriers, until she finally said “si”. They were married in San Fratello, Sicily in 1963.

Mike served as a Heavy Equipment Operator for the United States Military Academy for over 38 years. He honorably and proudly served his country in the U.S. Army during the Korean Conflict. He was a lifetime member of Black Rock Fish & Game Club, and was a member of the Cornwall Historical Society and the American Legion Post 353. A lifelong history buff, he enjoyed participating in historical re-enactments and collecting memorabilia.

Mike was an active member of St. Thomas of Canterbury Church. A family statement reads: “Our husband, father, grandfather, was a gentle man, devoted to his family. He was always ready for a party though, with his dry wit and charm. He loved the sun and always treasured his time in Florida. When he wasn’t lying in the sun he was building his endless rock wall. He touched many people, and will be missed greatly.”

Visitation will be held from 2 to 4 p.m. and 7 to 9 p.m. on Wednesday, December 12th at Quigley-Sullivan Funeral Home, Inc., 337 Hudson St. Cornwall-On-Hudson, NY. A Mass of Christian Burial will be held at 10 a.m. on Thursday, December 13th at St. Thomas of Canterbury Church, 340 Hudson Street, Cornwall-On-Hudson, NY. Interment will follow at St. Thomas Cemetery, Cornwall, NY.

Arrangements are entrusted to Quigley-Sullivan Funeral Home, Inc.; to send condolences or to get directions to the funeral home, please go to www.Quigleybros.com.

We encourage you to share any memorable photos or stories about Michael. All tributes placed on and purchased through this memorial website will remain on in perpetuity for future generations.

LC
Sorry to learn of the passing of our longtime neighbor Mike. Our deepest sympathy to Angelina and Mary, Michael, Grandchildren and Tony and Pina. Mike, as well as your family are in our prayers, Love, Lucille and Ralph Costanzo

Lucille A, Costanzo - Tuesday December 11, 2018 via Condolence Message
Share This:

With heartfelt condolences, Everyone at Drake Loeb PLLC
Tuesday December 11, 2018 via Heartfelt Sympathies | Order flowers in memory of Michael
Share This:

Thinking of you and remembering Michael with warm affection. From the Koments
Ann Marie,, Janet, Barbara, Nancy, Lori and John - Monday December 10, 2018 via Heartfelt Sympathies | Order flowers in memory of Michael
Share This:

Wishing you peace to bring comfort, courage to face the days ahead and loving memories to forever hold in your hearts.
Lisa, Rick, Armand & Annabella Loscalzo - Monday December 10, 2018 via Heartfelt Sympathies | Order flowers in memory of Michael
Share This:

With prayers and deepest condolences to the Canausa family. We are so sorry for your loss.
Dawn E. & Gregg - Monday December 10, 2018 via Heartfelt Sympathies | Order flowers in memory of Michael
Share This:

JR
My deepest sympathies for your loss. Mr. Canausa is about the same age as my own grandfather. I know what really helps me is my family and my faith. I know the scripture in 1 Corinthians about “the God of all comfort, who comforts us in all our trials so that we may be able to comfort others” has really proved true for me. I hope that your family will find comfort your loss.
J. Robinson - Monday December 10, 2018 via Condolence Message
Share This:
1
Page 1 of 1
Share
×