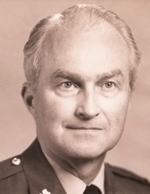 He was born on August 24, 1927 in Hollywood, California to Paul and Helen (Greer) Rising.

Lucien was known and loved as a gentleman and a gentle man. His well-lived life took him all over the world where he always made friends. One hallmark of his life was respect for all people regardless of rank or circumstance.

Lucien grew up in Beverly Hills, California and lived there until 1946. Lucien graduated from the United States Military Academy Preparatory School in West Point, New York in 1950 and was commissioned in the Infantry. He spent more than fourteen years overseas; nine years in Italy, three in the Netherlands, plus tours in Korea and Vietnam. He received a Master’s Degree in Aerospace Engineering from the University of Arizona and later a BA in Spanish from the University of Colorado. His tours of duty included a teaching position at West Point. Lucien had formal schooling in Dutch, Spanish, French, German, Italian and Vietnamese. After thirty years of service, Lucien and Suzy retired in Colorado Springs in 1980.

Lucien’s decorations and awards include the Defense Superior Service Medal, Legion of Merit, Meritorious Service Medals, Army Commendation Medals, Vietnam Service Medal, Ranger Tab, Combat Infantry Badge, and Vietnam Campaign Medal. His foreign awards include the Vietnam Armed Forces Honor Medal First Class and the Knight of the Order to the Merit of the Italian Republic. Lucien received the Order of Orange-Nassau, Degree of Commander (Knight’s Cross with Swords), from Queen Juliana of the Netherlands, and while stationed in Italy he completed the Italian Elite Army Alpine Corp training earning their trademark Alpini hat.

Lucien was very active in patriotic organizations. He held a variety of offices in the Sons of the American Revolution and was a member of the Sons and Daughters of the Pilgrims, the Society of Colonial Wars, and the General Society of the War of 1812. He was also a Mason and Shriner.

He is survived by his wife of sixty-three years, Suzanne Lois (Drysdale) Rising; his two sons, Greer Scott (Eileen) and John Edward (Valerie); and his three grandchildren, Kurt (Kelsey), Scott, and Julie.