Memorial Candle Tribute From
Quigley-Sullivan Funeral Home, Inc.
"We are honored to provide this Book of Memories to the family."
View full message >>>
In Memory of
Armand J.
Nannini
1922 - 2016
Menu
Send Flowers 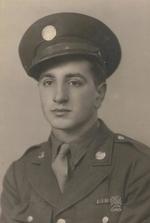 Armand J. Nannini, of Cornwall, NY entered into eternal rest on September 23, 2016 at Wingate at Beacon, Beacon, NY. He was 93 years old.

The son of the late Enrico and Fernanda Nannini, Armand was born on October 11, 1922 in Jersey City, NJ.

Armand was a Machinist for Union Carbide in Sterling Forest, NY and an Equipment Operator for Callahan Nannini Quarry in Salisbury Mills, NY.

Armand honorably and proudly served his country as a member of the U.S. Army during WWII and played a part in the Battle of the Bulge, the Normandy Invasion and the Liberation of France. He was a member of the Mountainville Engine Co. #3.

A family statement reads: “Armand was a generous and supportive man who brought humor and kindness to his family every day. His three grandchildren and their spouses and seven great grandchildren were a huge part of his life and they brought him endless joy. Throughout the years, he spent countless hours sharing WWII memories, mowing grass, and rooting for the NY Yankees and NY Giants. We are forever grateful for his kindness, compassion and sincerity”.

Visitation will be held from 4 to 8 p.m. on Tuesday, September 27th at Quigley Bros. Funeral Home, 337 Hudson St. Cornwall-On-Hudson, NY. A Funeral Service will be held at 11 a.m. on Wednesday, September 28th at the funeral home. Burial with Military Honors will follow the Service at St. Thomas Cemetery, Cornwall, NY

Memorial Contributions in Armand’s name may be made to Mountainville Engine Co. #3, Starr Road, Mountainville, NY, 10953.